One in eight women will develop or die from breast cancer.  Having a mission statement to end breast cancer is noble in words.  How an organization goes about achieving that mission shows whether it is noble in deed.

Susan G. Komen Foundation, whose symbol is a bold pink breast cancer ribbon, is the world’s largest nonprofit source of funding for the fight against breast cancer.  It’s provided more than $70 million to more than 200 organizations in more than 60 countries to reduce breast cancer deaths in America, Africa, Asia, Europe, and the Middle East.

One of Komen’s bridges is with Baker Hughes Inc., one of the largest global suppliers of oilfield services, products, technology and systems to the oil and natural gas industry.  For a second year, Baker Hughes is teaming up with Susan G Komen’s “Race for the Cure” by donating $100,000 and — painting and distributing 1,000 “Komen pink” drill bits worldwide.  The pink drill bits are “a reminder of the importance of supporting research, treatment, screening, and education to help find the cures for this disease, which claims a life every 60 seconds.”

They call it “Doing Our Bit for the Cure.”

Admittedly, it has a nice PR ring.  But it is hard to imagine these rosy bits raising much awareness or goodwill while they grind away at the earth miles underground.  And when you consider the toxic brew of chemicals, including many known cancer causing agents like Benzene, used to help those bits do their job drilling for and extracting oil and natural gas, their pink hue starts to look a lot less rosy.

In a recent study the National Institute for Occupational Safety and Health explains the dangers of Benzene (from Los Angles Times) :

And as International Business Times points out:

When you add that about a third of the chemicals used and the effects of their use are unknown even to state or federal regulatory agencies because drilling companies have successfully claimed them as “trade secrets,” those Komen pink bits become a lot more muddy. 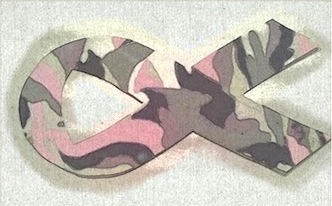 While Baker Hughes has this month started to fully disclose the chemicals used in its hydraulic fracturing operations,  if it’s really interested in supporting the healthy pink of women and their own workers, they would make innovating operations to find less toxic ways of doing business their top priority.

Sadly, the Komen Foundation response to International Business Times that:  “the evidence to this point does not establish a connection between fracking and breast cancer,”  is cheap camouflage that is coating Komen pink breast cancer ribbons in a sickly green…