This is the 4th installment in my Bad Luck Cadet Series.

It happened on Tuesday morning. The call came in and essentially I was IN. I would begin the police academy on August 13. I was told there was a lot to do and they wanted to see me later that same afternoon.

I arrived at the police department and sat down next to Miss Ponytail. I found out her name was Stacy and she was from Montana. She told me she had always wanted to be a police officer and had seen the ad online. Mo was nowhere in sight and I was pretty sure it was not good news for him. 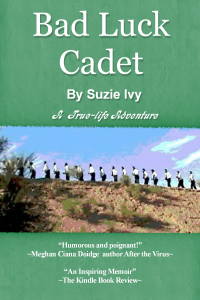 Sgt. Spears asked us both to step into his office. We were given an academy letter telling us what to expect and what would be needed. We were told we would be issued a check for our uniform allowance and from that we would be expected to purchase what we needed.

He told us to get our identification cards as soon as we left his office, a secretary would issue them. Sgt. Spears also said we would begin being paid on the following Monday and would be expected to be at the police department at 0800 Monday through Friday until we left for PAFRA.

Sgt. Spears explained Small Town Police Department (STPD) was in need of female officers and we would be the first if we succeeded at the academy. I had lived here for over ten years and never realized there were no female officers. I believe Sgt. Spears was setting his star on Stacy and did not think I would make it. He seemed to be speaking to her and I was only a side bar.

Stacy and I made plans to head to Phoenix for a uniform store the following morning. We needed to do a turn around trip so it would make for a long day. Stacy seemed more likeable as I got to know her. She was 26-years-old and had a 7-year-old daughter. Her daughter was living with her ex-husband while Stacy attended the academy. She told me she was very nervous and heard the academy was difficult.

I had put a lot of pressure on myself about getting to the academy but thought very little about actually being there. I would probably begin getting nervous a few days before we left but for now I was just relieved. Stacy said she had always dreamed of being a police officer and this was the beginning of her dream.

That evening I had to break the news to my husband. I made his favorite dinner. Cassie my youngest daughter and my son Roger were home for dinner as well.

“I have news.” This was said in a determined voice lacking any excitement.

Everyone looked my way and dinner came to a standstill.

“I’m leaving for the police academy on August 12th. It begins on August 13th. I’ll be gone for 18 weeks and you will all be fending for yourselves.”

Cassie jumped up and gave me a hug.

Roger just stared. He then got up from the table and left the room.

My husband asked, “Is this what you really want?”

“Well congratulations I’m sure you will do great. What’s this about 18 weeks?”

I explained I would be living in a dorm and weekends off were up to the academy staff. I told him I would come home anytime I could.

Norman and I met my freshman year in college. He was in his third year studying to be an engineer. We fell in love, one thing led to another and then we had one of those talked about moments when the condom actually broke. Nine months later Letty was born. Norman married me as soon as we discovered there were consequences to our actions and went with me to tell my family. I dropped out of college and discovered I loved being a mom. Norman finished college and began his career. Those first years were lean but Norman felt if I wanted to stay home and raise Letty, he would do everything he could to make it work.

I loved being a mom up until Cassie started high school. These past four years were difficult. I knew I either needed to finish college or decide what I wanted to do now that I was all grown up. The midlife crisis did not really set in until this past year. Turning 40 and Cassie’s final year of high school seemed to do the trick.

Roger came back out and said he had been reading online about what was expected at the police academy. He said I would need to jump a six foot wall. I could tell he was feeling rather smug about it.

“So I’ll jump a six foot wall.” I replied. “Is there anything else your worried about?”

“Mom, you’re being ridiculous. You can’t possible think you’ll make it through the police academy?”

“That’s enough,”interjected Norman. “What your mother does or doesn’t do will be up to her. She’s worked hard and she deserves a chance. I will not hear one more negative word out of your mouth.”

Have I mentioned how much I love my husband? He’s just a great guy. I would miss him and realized we had never been apart for more than a week during our marriage.

I asked him if he wanted to go to bed early. We cleaned up the dinner table together, left dishes in the sink and went to bed. Hours later, I was trying to fall asleep but all I could think about was a six foot wall.

If you want to follow my adventures at the police academy from the beginning, start with  Bad Luck Cadet #1 – Accidents Happen.  It’s all about fun, laughter and pain.  To be honest, at the time, it was more about pain, pain and pain! — Suzie

My story continues with: Bad Luck Cadet #5 – Being Late Will Get You Fired

View all posts by Suzie Ivy