In 1963  Martin Luther King Jr. didn’t just share his dream of the future and his faith in the American peoples’ (and world’s) ability to come together for equality and justice.  He spoke not just of rights and achieving a moral outcome.  He cautioned us about responsibilities and a moral process.  He challenged us with the necessity “of meeting physical force with soul force.”

“In the process of gaining our rightful place
we must not be guilty of wrongful deeds.
Let us not seek to satisfy our thirst for freedom
by drinking from the cup of bitterness and hatred.
We must forever conduct our struggle
on the high plane of dignity and discipline.
We must not allow our creative protest
to degenerate into physical violence.
Again and again, we must rise to majestic heights
of meeting physical force with soul force.” 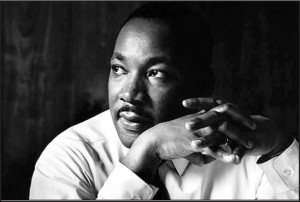