“…a fascinating insider’s depiction of political life, and a compelling morality tale.” 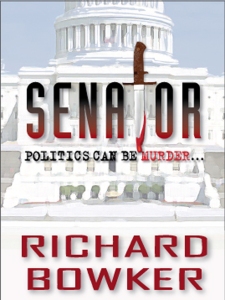 When should a senator (or any politician) stop serving in government? Is the slow seep of corruption in values and interests inevitable?  Do politicians even know themselves when they’ve stopped serving the people’s interests except as a means to re-election?

Senator James O’Connor (R) is running for reelection in Massachusetts.  He is a skilled politician from humble background and an effective policy maker that is well liked.  Then one rainy night he finds his mistress brutally murdered and his life and the election get messy.

The plot of SENATOR might seem almost clichéd for a political thriller, but Richard Bowker thoughtfully and entertainingly presents a compellingly simple but twisted tale.  The who and the why of the mistress’s death becomes almost secondary as we follow Jim’s daily life and get caught up in his re-election campaign.  Will he get re-elected?  And, more importantly, should he get re-elected?

“I am a politician.” Jim tells the reader with his very first words. Whether that is a confession or a simple statement of fact becomes less easy to decipher as the story unfolds.  Yes, he knows how to connect with the voters and get things done for his constituents.  Yes, he understands the system and accomplished legislation that bettered the nation.  Yes, we are all a little guilty and a little innocent.  But then even Jim begins to doubt himself and his candidacy.

Life has a way of becoming endlessly complicated and interconnected for everyone. When it comes to politicians, it is amplified ten-fold.  Eventually the scale begins to tip and the question then becomes at what point is a politician too compromised, whether through secrets, deals, or life in general, to effectively serve the citizenry’s best interests? Ideally one would hope before major damage is done, but our history in American politics has clearly shown otherwise. Can we talk term limits?

SENATOR was first published in 1994, but it is only now available as an e-book.  The story and the questions SENATOR provokes are still valid today.  SENATOR is a fast-paced murder mystery/thriller, a fascinating insider’s depiction of political life, and a compelling morality tale.  What more could you ask for  — except maybe a sequel.