It’s hard to enjoy your day in the media spotlight when Mother Nature is flexing her might by hitting Australia’s already flood-ravaged northern Queensland with “Yasi” its worst ever cyclone while, simultaneously, laying low 30 states in the US and a third of Americans with high winds, record snow, sleet and frigid temperatures in a massive winter storm now being called the Groundhog Day blizzard.

Nationwide in the US, 6,700 flights were canceled on Tuesday and 4,600 on Wednesday and record-breaking snow and cold reported in parts of Colorado, Kansas, Illinois, Michigan, Wisconsin, New Mexico…

The good news … Punxsutawney Phil didn’t see his shadow so he is predicting spring will come early.

The bad news … Phil is less accurate than a tossed coin at predicting the weather.

According to the StormFax Almanac, Phil has seen his shadow and predicted six more weeks of winter 99 of 115 times, or about 86 percent of the time. But when Phil’s yearly Feb. 2 predictions are compared with historical records for Punxsutawney, Pa., it turns out the rodent weatherman was right only about 39 percent of the time.

And According to the National Geographic, Phil is suffering from a bit of an identity crisis as well:

Along the way, February 2 also became associated with weather prediction, perhaps due to its proximity to the pagan Celtic festival of Imbolc—also a time of meteorological superstition—which falls on February 1.

Tradition held that the weather on Candlemas was important: Clear skies meant an extended winter.

Legend has it that the Romans also believed that conditions during the first days of February were good predictors of future weather, but the empire looked to hedgehogs for their forecasts.

These two traditions melded in Germany and were brought over to the United States by German immigrants who settled in Pennsylvania. Lacking hedgehogs, the German settlers substituted native groundhogs in the ritual, and Groundhog Day was born.

No doubt it’s been affecting his accuracy.  So chances are, we will all have more opportunity for this: 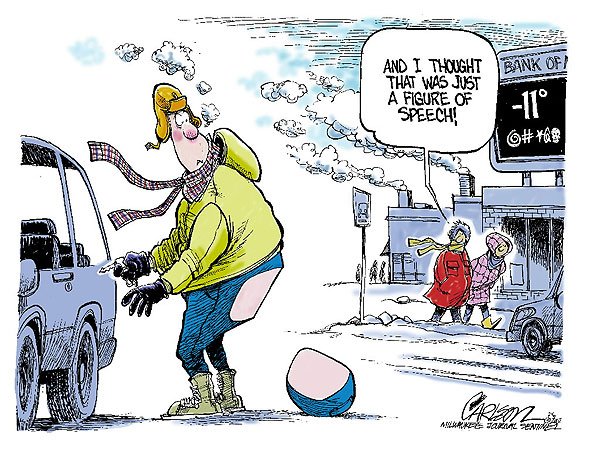 And the next few years look to be cold and colder, according to AccuWeather.com Chief Long Range Forecaster Joe Bastardi:

Overall, Bastardi is predicting three or four of the next five winters to be colder than normal for much of the U.S., based on trends observed in La Niñas throughout history.

He is concerned that, amid the current recession, more colder-than-normal conditions in the winters ahead will put extra financial strain on families in the form of higher heating bills.

Bastardi is also predicting the long-term climate to turn colder over the next 20 to 30 years with global temperatures, as measured by satellite, returning to levels they were at in the late 1970s.

Sorry, couldn’t help it.  Just had to include these videos.