Back in 2008 & 2009 there were headlines, numbers, and analysis being thrown at FDR’s New Deal almost daily.  Obama Gives Us the Same Old New Deal. And, How Government Prolonged the Depression. Or, Stimulus: Can it work like Roosevelt’s New Deal?  And Roosevelt’s ‘New Deal’ Resurfaces in US Economic Stimulus Debate. 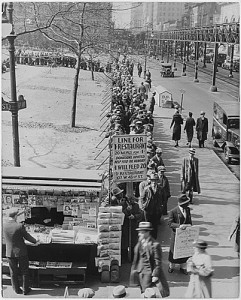 But all of these discussions seem to overlook the actual living and breathing people who were impacted by FDR’s New Deal and the very real ways these programs affected and changed their lives. Ways that are not easily translated into numbers for others to analyzed.

Eighty years ago, the daily life of the average citizen was very different then our lives are today. And yet many of the financial and economic challenges they faced then seem eerily familiar. Does that mean we are headed for a Great Depression? Or that we need another New Deal? I don’t know. I am not an economist and I don’t want to play one on this blog. But I would like to present some additional numbers and words for everyone to consider in the discussion of what worked and didn’t work.

Most historians mark the start of The Great Depression as, Black Tuesday, October 29,1929. Franklin D. Roosevelt was inaugurated March 4,1933. From 1929 to 1933, the unemployment rate went from 4% to 25%. In addition, in 1933, the underemployment (lower wages and hours) rate was 25%. Which meant, nearly 50% of U.S. households in 1933 were directly experiencing unemployment or underemployment.

So what did it all mean to the American people who lived with those numbers everyday? What did average Americans think about the New Deal, The Great Depression, and FDR back when it really mattered whether FDR’s New Deal worked or not?

The Depression’s Impact on Lives

Well, thanks to a Work Projects Administration (WPA) New Deal program – called the Federal Writers’ Project I was able to find the actual words and stories of American citizens during that time. So I’ll let these Americans speak for themselves. (Interviews are condensed, full length versions can be found at American Life Histories: Manuscripts from the Federal Writers’ Project, 1936-1940.)

Would Another New Deal Help?

So what is my take on FDR’s New Deal? Do I think it worked? Yes, because I think the it did what it needed to do for the American people. The New Deal gave us what we needed to survive:

HOPE – for their future

FOCUS – beyond their daily existence

DIVERSION – from their anger and resentment

LIFELINE – in the face of total desperation

FAIRNESS – that the government was looking out for them

And here’s my hope – as everyone continues to debate our current economic situation, the whys and hows of the New Deal, and what any of this could mean for us now, that we not forget that there are very real and complex American lives at the center of all of this, and they are not easily reduced to numbers and simple formulas.