With the New Year only days away, you can smell the change is in the air.  Or, is that just more PR?

All natural, but the process

Let the change begin with snack foods.  Well maybe not.  Apparently we consumers are ‘howling’ for natural.   Or at least the absence of artificial – as in additives, preservatives and colors.  So much so that we spend nearly $13 billion a year on natural foods – those defined as having all natural ingredients.  Though I don’t think they count arsenic in that total.

Note the high salt and fat remain.  After all, they are ‘all natural’ ingredients.  It seems we want better – all natural ingredients, not best – all natural products.  So don’t expect to see a run on the apple and carrots any time soon.

ple of what is wrong with congress – pork barrel spending.  But apparently, it is not pork barrel spending when Congress participates in lettermarking and phonemarking two less well-known processes used to request funding for projects in their home districts.

A spokeswoman for Rep. Kirk explains his actions thusly:

And what makes lettermarking and phonemarking even better for righteous earmarking opponents?  They take place outside the normal appropriations process and are less easily tracked.

Not satisfied with the way unemployment is quantified, the Bureau of Labor Statistics has decided to make changes.  Though not in a way you might think.  In 1994 the US government changed the definition of the “Official” unemployment rate from U5 which included “discouraged workers” and “marginally attached workers” to U3 (only those workers who had actively looked for work within the last 4 weeks) thereby magically shrinking the ‘official’ number of unemployed. 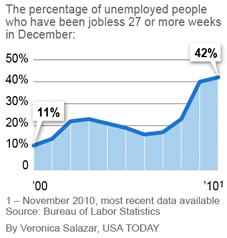 Now the BLS is making changes again.  But not to add back the ignored unemployed.  They are only adding another category to measure their official count of the long term unemployed.  They want to be able to follow the wave of people moving from two years unemployed to five years.  Yes, it will be nice to be able to follow the tsunami.  But it won’t change the official unemployment rate.  Which will remain, officially, much lower than the unemployment reality.

So what changes are you seeing?  And are they real or just PR?